Kathy Weddle Sizer, President of the Yakima Valley Genealogical Society, has been a member for 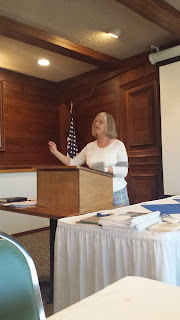 over 40 years. On June 10, 2015 she explained the benefits of society membership and active participation to those attending the TriCity Genealogical Society meeting. As with any other organization, club, or society, membership in a genealogical society can provide companionship which without effort leads to mentorship. Hiking can be done alone. It is not wise but it is possible. Someone that is interested in hiking would benefit by joining an organization where they can learn more about terrains, gear, and methods. The same is true for genealogy. It too can be done in solitude but the void created by solitary research can lead to innocent mistakes.

Kathy provided an example that was close to home. Her niece found Kathy’s grandmother’s name listed on the Social Security Death Index. Using the location of Kathy’s grandmother’s last benefit location as her place of death, she made a grave error. Kathy’s grandmother died in Union Gap but her last Social Security benefit was received in Cle Elum. Kathy’s niece innocently used the Cle Elum location as her place of death. This error is now available for others to copy from Ancestry.com Members Public Trees. Had Kathy’s niece attended meetings and interacted with other researchers she would have known that there can easily be a difference between the last benefit location and the death location. Kathy also pointed out that many errors like this are available to copy from various sites online and warned researchers about the fallacies available in online family trees.

Interacting with other researchers can help someone tear down brick walls. Many a seasoned genealogist is happy to share the methods that lead to their own personal victories that can also be repeated by researchers struggling to understand the best way to prove historical facts. There are also seasoned genealogists who focus on particular studies like medical information or military involvement. Kathy shared stores about adoption cases that were solved by following leads made available from other members or presentations at meetings.

There is strength in numbers. A society represents a group of people and through their efforts great repositories can be created. Kathy gave many examples of what can be found at the Yakima Valley Genealogical Society library but also provided personal stories of great discoveries she had experienced by researching at genealogical societies close to her ancestral homes.

Kathy summarized her presentation by saying, “My membership in my local society is the best gift I can give myself.” Kathy’s devotion to local societies was not only enthusiastically testified verbally but also visually. Even an arm in a sling didn’t hold her back from enjoying the TriCity Genealogical Society meeting.
Posted by Susan Faulkner at 7:43 PM No comments: 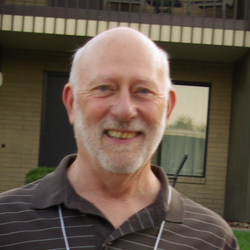 Ray Baalman is this month’s winner of the Archived Document Contest. He submitted two documents from 1700s France. More importantly he shared with us a very valuable lesson. “The important principle illustrated here is NEVER overlook the importance of witnesses at baptisms and marriages. They are often relatives and can give important clues about where to look next.” Ray illustrated this lesson by explaining that he found his seventh great grandmother recorded as the godmother of his fifth great grandmother on that grandmother’s marriage record.

Ray wins an annual subscription to Newspapers.com. With this subscription he will have access to over 3600 newspapers from the 1700s to the 2000s. There are currently 103,266,276 pages available for viewing through the every-word searchable databases. For more information about Newspapers.com go to www.newspapers.com or read their very entertaining blog titled Fishwrap at blog.newspapers.com

Below is Ray Baalman's submission including copies of the documents and a translation from French to English.

Here is an entry for May's Archived Record Contest from Ray Baalman.
I am submitting two eighteenth-century documents I discovered on microfilms from the Family History Library and read at the Richland Family History Center. I am submitting both because they are related, and they point out an important principle of genealogical research. I am also appending a transcription and translation of the records since they are in French and a bit hard to read.
For many centuries, most of my French ancestors lived in or very nearby the town of Saint Avold in the east of France, not far from the German border. One of the more prominent members of the family, Christophe Margot, was a successful tanner, who lived and practiced his trade in the town of Saint Avold. I found his baptismal record in the parish register and nothing more until his first child was baptized when Christophe was 29 years old. I could not find Christophe’s marriage record.
After locating the baptismal records of all three of his children and studying them closely, I discovered that his second child (my fifth great-grandmother), who was baptized in 1721, had godparents who came from a different town (sarlouys on the record, now spelled Saarlouis) some 20 miles north of Saint Avold. I ordered the film for marriage records in Saarlouis (which was in France then, but is now in Germany) and found that the marriage had taken place there in 1717. The marriage record also proved that the godmother of my fifth great-grandmother was her grandmother, my seventh great.
The important principle illustrated here is NEVER overlook the importance of witnesses at baptisms and marriages. They are often relatives and can give important clues about where to look next. 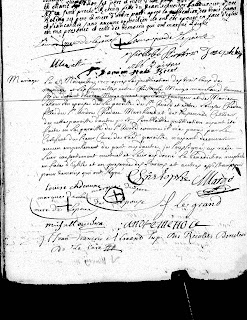 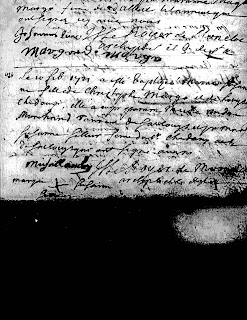 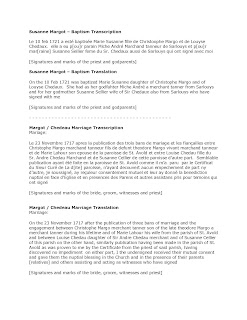 Posted by Susan Faulkner at 7:42 AM No comments: