The TriCity Genealogical Society does not typically meet during the summer months, but those that 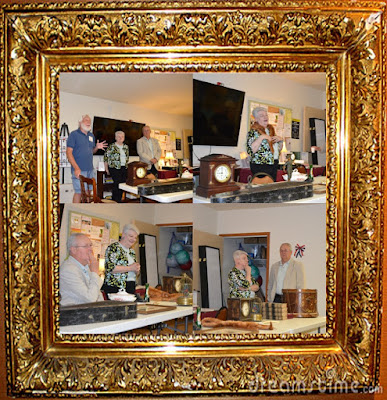 attended the Maurer Antique Appraisal Special Event were once again Wowed by an Art Kelly Spectacular on July 13, 2016.


Terry and Kathy Maurer of Maurer Appraisals provided TCGS members their own Antique Roadshow. Those members that registered to have their antiques valuated obtained a better understanding of their items. Everyone in the audience, however, learned something new about history and items that surrounded our ancestors.

Terry Maurer began the evening by explaining the difference between Valuations and Appraisals. Valuations are typically done through a home visit. The Maurers often will visit a client’s home and have discussions about various items. They can provide some interesting tidbits of the history of the item and an approximate value. Appraisals are written legal documents that go into much more detail about an item or a collection. Valuations are typically used when an owner of antiques is curious about their items or collection. Appraisals are necessary when an item or collection is of high value, usually over $5000.00, and addresses issues that come up during probate, taxes, and insurance.

Antique values change because retail interests change. Terry Maurer provided a wonderful example using the well-known PBS television program of the “Antiques Roadshow”. The “Antiques Roadshow” aired a special episode on their 15th year anniversary. They showed the original interaction between the antique owner and the appraiser. 15 years later PBS asked the same appraiser (if they could locate them) to redo the valuation of the same item. Terry found it interesting that there was a very close ratio of values had increased, stayed the same, and decreased. He encouraged the audience to understand that antiques are not a good financial investment, but that the collection of antiques can be an enjoyable hobby.

After this wonderful and educational introduction, Terry and Kathy discussed each item that was brought to the TriCity Genealogical Society Special Event. As interesting as each item was, accompanied by many gasps and giggles, I am still basking in my own personal discoveries.

My husband and I couldn’t agree on which items to have valuated, so I submitted two items and Kathy encouraged me to bring both of them to the meeting. One of my husband’s prize possessions has been an Audubon lithograph. I’ve been skeptical of it for years. Doing a small amount of research I was concerned that it was a fraud. I was much more interested in a cane bottom chair that my husband had inherited. His opinion of the chair was that it didn’t have much value. He grew up with it sitting to the side of the dining room table and wasn’t sure if his mother had purchased it or if her mother had given it to her. He believed that it was manufactured around 1940 and was merely the last survivor of someone’s dinette set. The Maurers valued the lithograph at about $25.00, unless we could convince someone to pay more. The back of the lithograph had a certificate from Calhoun’s Collectors Society and the certificate did specify that it was a Limited Edition, not of Audubon but rather of Calhoun’s. Certificates like this one should be read very carefully and parsed out for what Terry Maurer termed “weasel words”. Kathy Maurer explained that the cane bottom chair was made of solid wood and that the cane-ing was unusual. She explained that the chair was probably made sometime between 1870 and 1890. Alone it didn’t carry a high value, but in that moment it became extremely sentimental to me.

There were much more fascinating items shared during the event. Some antique owners were encouraged to research their item for more detail to get a better understanding of what they had. In order to start their research the Maurers provided them with specific information and told them what to look for. Manufacturing marks etcetera can help place a date or location with an item. With better understanding of the item and its history it would be easier to get a more definite answer to what their item was worth.

Antiques tell beautiful stories and there were many stories explored and unraveled on July 13. Some of the stories are just beginning to surface. In my own situation my husband and I are shocked to discover that his family had such an old item like the cane bottom chair in his impoverished childhood home. We are now looking for additional clues as to where it came from and how it got to him. I’m sure there are other individuals that attended the event that have their own stories to unravel. Marian Halverson, however, is not one of those individuals. The climax of the event was a set of small medallions set in a necklace setting that was accompanied by a beautiful photograph of her grandmother as a young woman wearing the necklace. This proof of provenance is often what makes an antique valuable, yet the value may very well mean so much in a sentimental state that the monetary valuation is mute.


Terry Maurer writes a column titled “What’s It Worth” that is published in the TriCity Herald every other Sunday. To learn more about antiques and their value follow his entertaining column. Here is a link to several of his columns on the TriCity Herald website. http://www.tri-cityherald.com/living/liv-columns-blogs/antique-appraisals/ Hopefully you will discover more about your ancestors by studying the items that surrounded them. You too may find a story that needs unraveling.
Posted by Susan Faulkner at 9:21 AM No comments:

It is not often that you find members of various organizations coming together to enjoy one great event, but this is what happened on July 4, 2016. The TriCity Genealogical Society joined the Daughters of the American Revolution, and the Sons of the American Revolution at the River of Fire festival. They hosted a combined booth titled Patriotic Heritage.
As citizens of the United States of America we enjoy an amazing amount of freedom and independence. This has not come easy. Many have paid the ultimate price, giving their life so that so many can continue to be guaranteed a continuation of such rights.
The Sons and the Daughters of the American Revolution are lineage societies. In order to qualify to be a member of these organizations an applicant’s genealogy is submitted and reviewed to prove that they are a descendant of a Revolutionary War patriot.


The festival officially began with the Opening Ceremonies. The Sons of the American Revolution presented their Color Guard which brought a deeper dimension to the singing of the National Anthem. TriCity Genealogical Society Program Chairperson, Art Kelly, joined Keith Deaton as President Abraham Lincoln along with his other escorts on stage while the audience was taken back to historical political speeches. The soul of patriotism was stirred with the presentation of the Gettysburg Address.


At the River of Fire festival the Patriotic Heritage booth was nicely decorated with red, white, and blue. It was also adorned with many volunteers in historical costumes. Mannequins supported historical military uniforms. Banners with photographs of local fallen heroes bordered one side of the booth area, and the other side of the area was set aside for audience participation. Letters to active military personnel were written and deposited in a beautifully decorated mailbox. A coloring contest for the children allowed them to bring color to historical pictures. Celebrating our country’s independence was fun, festive, and active. Gentle chatting was also embraced as various society members enjoyed the day together.
The evening closed with a bang, literally. Most of the Patriotic Heritage Booth volunteers were home by the time the fireworks exploded however. They had enjoyed the day and felt that they had truly embraced so many aspects of an Independence Day celebration.
Thank you to TriCity Genealogical Society members who helped make this such an incredible day!! Art Kelly, Barry Moravek, Bill Floberg, Carol Powe, Gigi Bare, Ken Powe, Margaret Dunn, Margie Beldin, Marian Halverson, Sandra Floberg, Susan Faulkner, Susan Lohstreter, TJ Lannon, and Walt Wood.

Posted by Susan Faulkner at 12:18 PM No comments: