Which DNA Test Should I Take?

We are often asked, "Which DNA testing company should I test with?" That depends. If information on the direct paternal or maternal line is being sought, then FamilyTreeDNA is the only company that provides those tests. Otherwise, the autosomal DNA (atDNA) test is available from several companies including Ancestry.com, FamilyTree DNA, My Heritage and new to the market, LivingDNA.

But what is the BEST? It would be hard to say but we want our DNA to be "seen" by as many people as possible in order to find those ancestral connections. We want to be in as many "gene pools" as possible. So how do you accomplish this? Take an Ancestry.com DNA test.

Ancestry.com has some of the best sales and, right now, has the largest database. However, the other testing companies, except for 23andMe, allow the DNA raw data to be downloaded from Ancestry.com and uploaded, for free at the time of this writing, to FamilyTree DNA, MyHeritage and LivingDNA. As of this writing, LivingDNA has not yet established access to the matches in the LivingDNA databases, but access is coming. It is also not known if that access will cost.

Here's the best news. The raw DNA data from Ancestry.com can be downloaded and then uploaded FOR FREE at this time, to FamilyTreeDNA, MyHeritage and LivingDNA. That's an additional three (3) gene pools your data can swim around in. AND, you can also upload to GEDmatch, which is a third party tool open to all raw DNA data.

Your wondering how? Thomas MacEntee has created a handout which explains how to download your raw data from each testing company and how to upload that data to the three companies that accept raw DNA data. He has given us permission to post his handout on our blog.

Downloading and Uploading Your DNA Test Data by Thomas MacEntee


Posted by Tri-City Genealogical Society at 1:25 PM No comments:

December was a busy month for most of us with all the added events the holidays bring.  A couple of our members reported their involvement in genealogically or historically related events in our community.

TCGS member Connie Estep and Terry Andre presented Dupus Boomer's PREFABulous Richland on December 21st.  The presentation wove together the comic Dupus Boomer and the history of Richland's quick growth as Hanford needed workers.  You can find the handout here which contains additional resources on the topic and information about Richland walking and Hanford reactor tours.

The motto of Wreaths Across America is "Remember. Honor. Teach."  The organization's birth resulted from a surplus of wreaths made by the Worcester Wreath Company.  The company decided to use the wreaths to honor veterans by placing them at grave markers in Arlington Cemetery.  Eventually, other people wanted to be involved and the movement grew to over 700,000 wreaths placed in over 1,000 locations throughout the country in 2014.  The goal of Wreaths Across America is for veterans to be remembered and honored long past their deaths.  You can find more information at www.wreathsacrossamerica.org. 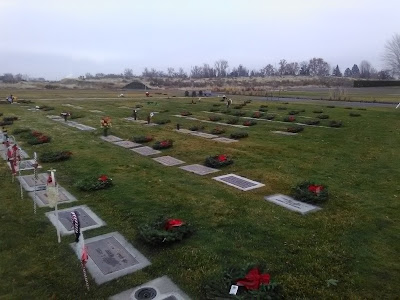 For the past four years, the Sons of the American Revolution - Mid-Columbia Chapter (SAR), Daughters of the American Revolution (DAR), and Eilan's Funeral Home have sponsored wreath laying in Richland.  This year's event happened on December 16th at Sunset Memorial Gardens in Richland, with about 20 people helping to lay 171 wreaths next to the grave markers of veterans.  Art Kelly participated in and reported on this year's event. 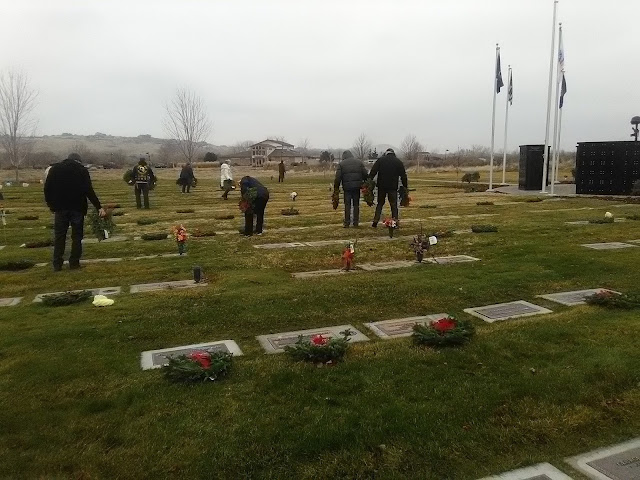 The group also honored William H. Johnston, who is the only Civil War veteran buried in Richland (in Resthaven Cemetery).  The following was read at the ceremony:


Today we honor the memory and service of William Hadden Johnston, born 22 Dec. 1843. As a 19 year old from Athens Ohio, he answered Mr. Lincoln’s call for volunteers from the various states to help preserve the Union. Pvt. William H. Johnston mustered into D Co. 75th Regt. Ohio Volunteer Infantry on 28 Oct. 1862. 75th Ohio was in 1st Division, 11th Corps, Army of the Potomac under Gen. Oliver Howard at the Battle of Chancellorsville and at the Battle of Gettysburg. 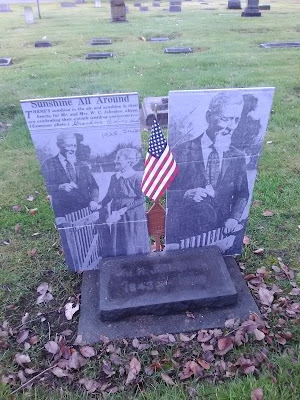 Pvt. Johnston was captured during the heavy fighting at Cemetery Hill during the second day of the Battle of Gettysburg, 2 July 1863. Sometime later he was exchanged for a Confederate prisoner as was custom during the first part of the war and rejoined his outfit.
August 1863, 75th Ohio was transferred with 1st Div., 11th Corps to Charleston Harbor in South Carolina while the other two Divisions of 11th Corp where sent to Tennessee to join Gen. Sherman for his famous march to the sea. 75th Ohio was at Charleston from August to September when it moved to Folly Island and later formed into mounted infantry and moved to Jacksonville, FL.  In August 1864, a small union force was attacked near Baldwin, FL just West of Jacksonville by elements of 2nd Florida Cav supported by some infantry.

A part of 75th Ohio mounted infantry war sent to Baldwin, FL in putative action against 2nd Florida Cav. This action did not go well and on 12 Aug 1864, Pvt. Johnston was wounded and captured. The surviving Union forces retreated to Jacksonville.  By this time in the war Union and Confederate forces were no longer exchanging prisoners, so Pvt. Johnston was sent to the prisoner of war camp at Andersonville.

Andersonville was a horror with overcrowding, and little or no sanitation, food, or medicine. Photographs of emaciated Union prisoners held at Andersonville taken at war’s end look very much look the later photo of NAZI Concentration Camp survivors of 80 years later. 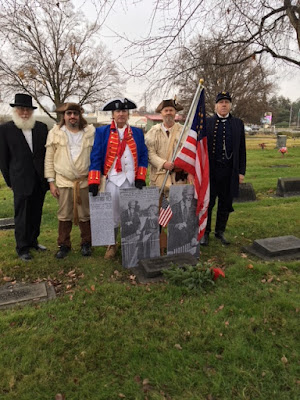 Pvt Johnston was held in captivity from August 1864 until his liberation in April 1865. He survived and was mustered out 25 May 1865. The Commandant of the Camp at Andersonville was tried for war crimes and executed.

William H. Johnston returned to his home in Athens, Ohio were he married and raised a family. The early part of the 20th century found William Johnston in Los Angeles and later in the Seattle area. He died 26 Jan 1938, at the home of his son in Richland, WA.

We owe him thanks for his service and sacrifice in preserving the Union and should resolve to make it our purpose to keep his memory alive for future generations.

Posted by Heather Murphy at 9:42 AM No comments: