"Traveling Through Time" Hard to Sit Through

About 65 individuals had a difficult time sitting through the Traveling Through Time seminar with speaker William Dollarhide. Within minutes of his opening remarks there was a desire to leave the room and research. 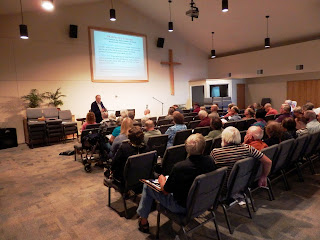 Successful Genealogical Research.” Rule number 1 was “Treat the brothers and sisters of your ancestors as equals.” With this rule Dollarhide encouraged everyone to obtain those important census records, vital records, and various historical documents on all collateral lines. He provided a great case study of locating his own Dollarhide Family Bible by following this rule. Most genealogists, he explained, focus so closely on their ancestral line that they overlook the very important clues that are available by examining records left behind by aunts, uncles, and cousins of every generation. With this he also told everyone that they had an awful lot of work to do. It was a difficult way to begin the day as we knew that we were only beginning to understand how little we had done.

In his second session Dollarhide taught about the American Migration Routes from 1750 to 1800. With easy delivery, as if he was explaining something very simple to an attentive child, he took us on a tour of how one road was built to lead to the need for another, or to connect an already important route. He explained that many of those same routes are still being used today and encouraged us to acquire a 1941 Rand McNally Road Atlas. The Interstate System was not developed until 1956 so many of the most used roads were built on historically proven routes developed over several hundreds of years of travel.

The Civil War created a massive amount of records, many are still available today. Not all of these were federal records either. In Dollarhide’s session titled “Genealogical Resources of the Civil War Era” he gave us information on where to look, both online and on microfilm at the Family History Library, for records created during this time.

The day ended with tools to find living people by using online resources. Dollarhide shared the story of his own research in the 1970s. City directories and telephone books were extremely important and he lived mere blocks away from the Pacific Bell Telephone Company. He spent weeks pouring through various telephone books in order to locate other people with the surname of Dollarhide. The Internet has provided many websites that have taken away the need for telephone books, yet the information is still available if a researcher knows where to look. He endorsed ZabaSearch.com as a free website that was worth a visit that would provide at least a 75% success rate. Pages of additional websites were also provided to help fill in the 25% gap of information. 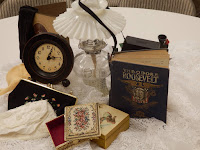 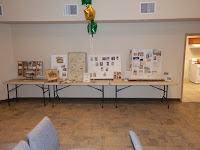 The day was packed full with easy to understand methods and freely provided tools. Instead of rushing to research we stayed, partially because we were stunned with the amount of information that we were being given. The other reason we stayed is that the Reata Springs Baptist Church was a wonderful and comfortable venue. The salad and sandwich buffet, stocked by the church’s teens, made a perfect lunch which was enjoyed at round banquet tables decorated with interesting and beautiful historical artifacts. There were Door Prizes, a Silent Auction, and Show and Tell items that also kept our interest.

When we left we hit the digital highway to look for a variety of documents and information that we may have never really examined before listening to William Dollarhide. We may have even done a few ZabaSearch.com queries to find our long lost friends and tell them about our wonderful day at the Traveling Through Time seminar.
Posted by Susan Faulkner at 9:33 PM No comments:

A List of Don'ts Revealed from August Archived Document Contest 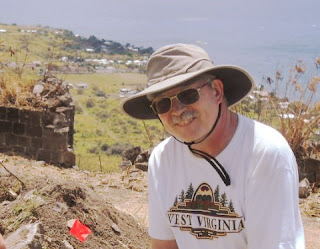 For the August Archived Document Contest, John Covey shared much more than an amazing document that he acquired off-line. He showed that it is possible to find clues that may take his research back to the 1500s. By reviewing his entry we can determine some “Don’ts” regarding family history research.

John Covey has arranged the annual fieldtrip for members of the TriCity Genealogical Society to research in Salt Lake’s Family History Library for many years. He knows that the vast amount of holdings have information important to his research. Even though John has made this trip several times, he continues to take the trip each year.

In June 2015 John discovered the baptismal record of his 8th great grandfather which was created in 1664. John did not arrive at the Family History Library expecting to locate this record, but rather found information leading to this record when he visited the basement of the library and researched German records. In this section of records he found a book that not only listed his 8th great grandfather’s information, but information continuing back for about another hundred years. Being a seasoned genealogist, John admits that the clues were a great find but that they were not documented. This gave him ideas, but in and of itself it was not a solid record.

John shared the 1664 baptismal record and his explanation in this entry to the Archived Document Contest. 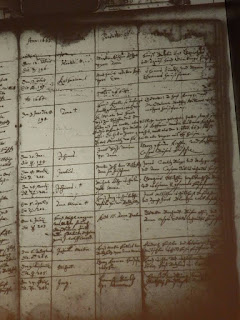 “For my Archived Document Contest entry this week I have posted a copy of my 8th Great Grandfather Johann Martin Hartlieb's baptismal record from 1664 that I got at the Family History Library in Salt Lake City last June. His is the third from the bottom of the page. Until that trip I had not even heard of him until I found a book in the German section of the library which lists the Hartlieb's in that part of Germany from the early 1600's up to the late 1800's. Through this book I have traced some other parts of the maternal line back to the late 1500s but with the book not having sources more work needs to be done on my part. While looking at the document I noticed some symbols in the first column that I did not understand, after some research I found out they were astrological symbols used for the seven planets (Sun, Moon, Mercury, Venus, Mars, Jupiter, and Saturn). I found that astrology was being practiced in churches up until the late 1600's in some areas of Europe.”

Through John’s entry to the August Archived Document Contest we can all learn what not to do.

1.            Don’t be afraid of the basement. Many repositories store important records in basements. This keeps them out of the hustle and bustle of day-to-day activity. Basements can be easily overlooked yet may contain records or clues to additional information that is extremely important to our research advancement.

3.            Don’t overlook anything that you find in a record. Once John found the 1664 baptismal record of his 8th great grandfather, he allowed his curiosity freedom. The baptismal record contained symbols that John did not understand. He discovered that astrology was practiced in churches up until the late 1600’s in some areas of Europe.

4.            Don’t assume that you need a detailed list of records created by hours of examining online catalogs in order to have a successful research trip. It is important to be prepared for research trips to any repository, but don’t let your list give you tunnel vision. New discoveries may very well lead to record sets that you had not previously considered.

5.            Don’t confine yourself to online research. The story that John shared gives us great examples of the type of records that are available beyond what the Internet has to offer.

John’s entry to the August Archived Document Contest won him an annual subscription to “Internet Genealogy.” “Internet Genealogy” is a genealogical magazine for people researching family trees, family history, their heritage and genealogy roots using the resources of the Internet. John is no foreigner to brick and mortar repositories but only because he knows how well these repositories fill out the research he is able to do online.

The winner of the September Archived Document Contest will win an annual subscription to Mocavo, which is a FindMyPast company. Mocavo has a highly sophisticated search engine bringing together vast amounts of indexes into one location. To enter the September contest simply share a digitized image of a record that you acquired in any method other than downloading from the Internet on the TriCity Genealogical Society Facebook page at https://www.facebook.com/TriCityGenealogicalSociety. Explain how you acquired the record and how it ties into your family history research.
Posted by Susan Faulkner at 8:00 AM 1 comment: