From the MyHeritage Blog:


Posted by Tri-City Genealogical Society at 3:41 PM No comments:

Notice: TCGS is Still Active, Even Though the Blog Isn't

Tri-City Genealogical Society is no longer able to make new blog postings on a regular schedule, but we want to let you know we are still an active group.

You can find our website at tricitygenealogicalsociety.org where you will find our current schedule of meetings and resources for Benton and Franklin counties in Washington State.
Posted by Heather Murphy at 2:41 PM No comments:

Genealogy Resources in Our Community

For monthly meetings in March and April the Tri-City Genealogical Society met at two important resources for genealogy within our community.  Attendees learned how two libraries can help them in their genealogical pursuits.

Read more »
Posted by Heather Murphy at 3:10 PM No comments:

RootsWeb - the Internet's oldest (since 1993) and largest FREE genealogical community. This was the feature of our TCGS Beginners' Class Wednesday night. Until 2017, its genealogical resources included searchable databases, free web space for public use, mailing lists, message boards, educational web pages, genealogical tools, and much more. In 2000, Ancestry bought RootsWeb with the understanding it would remain free forever. In 2017, however, there was a major security breach and Ancestry was forced to take down the site. Fortunately for us, Ancestry is working to get most of the data back up. There are many features back up and working but the mailing list archives are still unavailable. Today's RootsWeb can be found at https://www.rootsweb.com/.

One of the major groups of web pages hosted by RootsWeb was the USGenWeb site. These are free pages coordinated by volunteers for most of the states and counties in the United States. Not all pages have been restored, but most are up while some are dependent on what has been stored in the Internet Archives Wayback Machine. The RootsWeb Blog has an excellent explanation of what is available.

Ancestry.com's Wiki has been moved to the RootsWeb site and renamed the  Rootsweb Wiki  This is where The Source: A Guidebook to American Genealogy and Red Book: American State, County, and Town Sources can be found and used for free!

To visit and use some of the features on yesterday's RootsWeb.com, click here.

Posted by Tri-City Genealogical Society at 9:13 PM No comments:

Names and Their Many Variations

When looking in records for your ancestors, knowing their name is vital.  Oftentimes, though, the same person can be recorded in documents with different names, whether a nickname of their given name, an Americanized version of their surname, or some other variation.  There are many books and online lists that can help you identify common name variations.

A few examples from the above sections include:


If the book is not available in digital format, click the link to "view this catalog record in WorldCat for other possible copy locations."  The book may be available at a library closer than the Family History Library in Salt Lake City and may also be available for interlibrary loan.

Below are a few online sites that have name variation lists:


These online lists can be very long.  To easily find a name use the search feature of the web browser by pressing ctrl-F, and type in the name needed.

Names are important when searching for your ancestors, but often people do not appear in every record under the same name.  Knowing possible variations for surnames and nicknames for given names can help you better identify your ancestors.


Posted by Heather Murphy at 5:06 PM No comments:

Lawrence Clay of Kennewick, Washington, was recognized for his exceptional and consistent support of the goals and operation of the Tri-City Genealogical Society. He was selected for his dedication and enthusiasm to improve his local society. 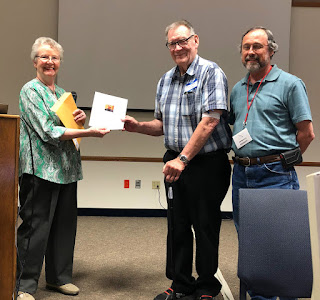 Since 2000, Mr. Clay has been an active member and volunteer with the Tri-City Genealogical Society. From 2008-2012, he was responsible for all TCGS publications, then became publicity chair for the next 2 years. He then started helping with membership and soon took over as chairman. For years, Mr. Clay has gathered genealogy donations for raffles, and with his projecting voice, he has sold raffle tickets and announced the lucky winners. He has made the raffles entertaining and successful, increasing the raffle proceeds to purchase new books for the society’s library. In addition, his expertise in parliamentary procedures has been a valuable resource at many of the Board meetings.

For his many years of sharing his commitment and with the local society, he richly deserved the recognition of being an Outstanding Volunteer.

Posted by Heather Murphy at 4:22 PM No comments:

How to Better Determine Relationships of DNA Matches

When looking at DNA matches the various companies give you a general range of possible relations, close relative to first cousin, first cousin to great-nephew/niece, third to fifth cousins, etc.  While this is somewhat helpful, it is also somewhat vague.  Estimating the generational differences between matches and using tools from the Shared cM Project can significantly narrow the possible relationships of DNA matches.

A few weeks ago a "cousin" contacted me through one of the major DNA genealogical companies.  She was a genetic match with my grandmother and wanted to determine their connection.  After a few emails back and forth looking for a common ancestor about four or five generations back she told me her father, Tom (name has been changed), was adopted and she was actually working on finding his birth family.  My grandma's connection with her father was too far back to be of much help with the information she currently had, but I offered to help with her search.

The closest genetic matches for Tom was a first cousin and a great-nephew, per the estimated relationships the DNA testing company suggested. At my request, she sent me the information so I could review it.

The first thing to do with a genetic match is determine the generational difference between the two matches.  In this case, the possible first cousin and Tom were both in their 60s.  The cousin did not have a family tree posted, so I was unable to look at the actual generations moving backward.  While being approximately the same age puts them most likely in the same generation, it is not a certainty.  For instance, my mother was born the same year as her aunt.  However, for the time being my assumption is that first cousins is still a plausible relationship.

With the second match, the supposed great-nephew was in his 30s compared to Tom in his 60s.  In this case I did have access to his parents' information and they were in their 50s.  Most likely there is only one generation between Tom and this match, not the two generations that would be required for a great-nephew.  The age difference would suggest this match is related to Tom by only one generation, meaning one of this person's parents is a possible sibling to Tom.

Looking at the generational difference is only the first step.  Next, look at the number of centimorgans (cM) the matches have in common.  Tom and his cousin have 1,164 cM in common.  Take that information to The Shared cM Project, compiled by genetic genealogist Blaine Bettinger, accessed through the DNA Painter website. Input the amount of shared cM and you will receive a chart with the likelihood of certain relationships.  This is what it looked like for Tom and his possible cousin match:

Looking for relationships one generation apart, the only likely option is that the match is Tom's half nephew, meaning one of this match's parents is Tom's half sibling.  By recognizing the generational differences and using this tool we were able to significantly narrow our search for a common relative.

At first, the assumed match was a great-nephew with the information from the testing company.  By looking at generational differences the assumed relationship changed to a nephew. Then, using the shared cM chart, the assumption changed to half-nephew.  This is an excellent example of how estimated relationships can change as we analyze the data regarding a genetic match rather than accepting the DNA company's estimation.

These tips are a good place to start when determining relationships between matches, but assumptions at this point are made from statistical probabilities and are not relationships of fact.  Further genealogical research and DNA testing are required to establish relationships with certainty.  With the number of possible common ancestors doubling each generation, using these strategies and tools can help focus your search for DNA matches more effectively by helping you focus on possible generations of common ancestors.


Posted by Heather Murphy at 4:21 PM No comments: