Members of the TriCity Genealogical Society met at the home of Anne Nolan and John Covey for an evening of social interaction on Wednesday, August 10th. Many favorite potluck dishes were shared and enjoyed. John fired up the grill and offered sausage to anyone interested. President Walt Wood and his wife brought the final touch, homemade pies.

Easy conversation was the sweetest dish however. When a group of genealogists gets together topics are endless. Successes from recent research trips were interwoven with stories about grandchildren. Medical issues past and current, including archaic terms and definitions, surfaced and disappeared at will. There was seldom a moment with nothing to say or a repeated story to enjoy.

There was a little official business. President Walt Wood presented the Outstanding Volunteer of the Year Awards which were originally presented in June at the Washington State Genealogical Society Conference in Tacoma. This year’s winners were Bill Floberg and John Covey. The following was not only printed on their certificates but read to those attending the social

Bill Floberg, of Kennewick, Washington, is recognized for his many years of support, 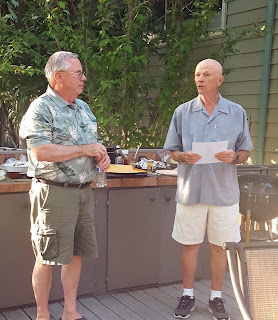 encouragement and assistance to the society. Mr. Floberg is one who is always working quietly in the background tending to the less than glamorous, but absolutely necessary, things that make a society successful. He can always be counted on to help whenever help is needed. For example, he manned the bookstore at the TCGS “Traveling Through Time” seminar in the fall of 2015. Had he not volunteered, there might not have been a bookstore. At present, Mr. Floberg is serving as vice-president of TCGS. He has also served as the membership chair for the last four years and chair of the judging committee for the year-long TCGS Archived Document Contest. Mr. Floberg is the definition of the word volunteer and richly deserves this recognition.


John Covey, of Richland, Washington, is recognized for his leadership and guidance through 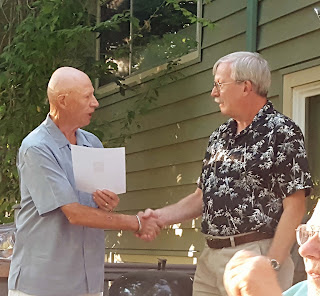 challenging times. He was nominated by the Tri-City Genealogical Society (TCGS). Mr. Covey has served two terms as TCGS President. During his extended tenure, he led without hesitancy and he never lost his focus on successfully leading the society during and through difficult times. For many years Mr. Covey has coordinated week-long trips to the Family History Center in Salt Lake City. He has also chaired the 2015 TCGS fall seminar “Traveling Through Time” with William Dollarhide as the featured presenter. Mr. Covey’s dedication to the preservation and success of TCGS makes him richly deserving of this award.


The TriCity Genealogical Society is honored to have this caliber of leadership guide the way. Bill Floberg and John Covey are in good company of Outstanding Volunteers awarded to other genealogical societies in the state of Washington. To read about the recognition given to other society volunteers access the Washington State Genealogical Society website’s article “Outstanding Volunteers and Teams – 2016”.
Posted by Susan Faulkner at 12:20 PM No comments: